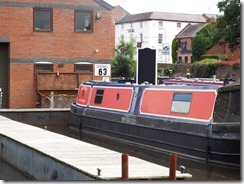 Just a 20 minute journey from our overnight mooring in the countryside and we were at York Street lock being met by two cheerful volunteer lock keepers  who ‘saw us through’ to Stourport Upper Basin.

As we entered the basin we spotted nb Avon which used to be moored at Lower Heyford and I believe was used in filming a 1981 episode of Worzel Gummage.
We wound our way through to the Lower Basin and joined the queue to descend to the Severn. 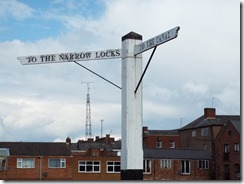 I guess we had to wait about an hour while two boats went down and one came up, but when it was our turn it took about 20 minutes to transit the two double staircases of locks with the help of our cheerful chappys.

Once out on the Severn we were soon at our first Severn Lock, Lincomb Lock, they look HUGE after our little narrow canal locks.

Holt Lock and Bevere Lock negotiated as well we arrived in Worcester to a welcoming party of Dragon Boats who were racing. Their safety boat asked us to wait until they started to race then basically  chase them down the course so we would be out of the way for the next race.

Once past the rowing club we found a mooring under the railway bridge, which we had to pay for by buying a £4 ticket at the nearby car park. 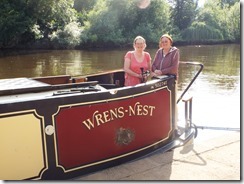 The first train over the bridge almost frightened the life out of us as it was so loud, fortunately they didn’t run through the night!

After we had settled in we had a visitor who we hadn’t seen for about 25 years; Phillipa was a member of the Cornerstone youth group which we used to run when we were much younger and we have re-connected through Facebook.

The weather forecast today bode well until late afternoon so we decided to try to make it to Gloucester non-stop. There was only Diglis and Upper Lode locks to go through and we made good time covering the 30 miles in 6 hours 40 minutes. We wasn’t speeding, honest, although we did almost reach 6 mph at one point  the down stream speed limit is 8 mph.

Finally we reached Gloucester Docks lock just before 3 pm and went up into the docks with nb May Pink, and whilst they successfully reversed onto a pontoon we were blown out of line by the wind and eventually conceded defeat and went in forwards. We are moored up right outside the Dr Foster’s pub and thought that it might be noisy, however as soon as we were settled it started to pelt with rain and as I write this there’s not a soul sitting at the outdoor tables.

Gin Palaces at Upton on Severn

We plan to spend a couple of nights here and then head down towards Slimbridge and no doubt meet up with lots of local friends.