Last weekend we were busy celebrating our friend Vic’s 65th birthday & his retirement in Devizes, which incidentally is where I had my first encounter with canals at age 3 when I was introduced to the Caen Hill flight of locks by my Aunt Bet.

We have known Vic & his wife Irene for over 38 years as they were Joy’s neighbours when I first met her (and after we were married) and on this occasion we met at the New Inn at Coate where they had Wadworths 6X straight from the barrel [that really is proper beer Maz!!!] and excellent food prepared by Vic’s daughter-in-law Elaine who together with husband Andy run a deli & outside catering company in Marlborough.

On Tuesday morning there was a knock on the boat at it was Matt from Tooleys who asked if we could tow a neighbouring boat, Marjorie B to their yard in Banbury for repairs, after a family conference to decide how we could fit this into our busy schedule we set off the same afternoon with Marjorie B in tow on ‘cross straps’ [i.e. tight behind us]  with Duncan, the incumbent of Marje the Barge steering her. We travelled as far as Aynho Wharf where we spent the night and continued onto Banbury Wednesday morning. It was quite an experience learning to tow another boat, especially through bridges which were on bends but we arrived there safely about 3 pm.

Thursday Joy went back to Heyford by train for her art class and I joined her in the afternoon to visit our friends Dick & Patsy. When we returned at Banbury we were amused to find we had been joined by two swans who slept beside us all night!

Friday I went to Cropredy to take a look at a boat which had flat battery problems and today we were joined by our son and a boatload of grandchildren, we boated back to Aynho with them and after some car shuffling we said goodbye with us all tired but happy.

We have been back from Oz for 10 days now, have overcome the jet lag (why does it only affect me on the way back home?) and are now back to something approaching normality.

This week has been busy with shopping trips to restock our cupboards pick up our mail, including 30 Christmas cards! I have to look for some sort of job now that our travelling is over for the time being and have visited various employment agencies, who are mostly about as much use as a chocolate teapot. Ideally I would like a contract job for about 3 or 4 months so we can go cruising again in the summer. So if you know of anything in the engineering, boating or IT line let me know. 🙂

We have visited to our boaty friends Sue & Barry down at Bradford on Avon, taking our grandson to school on the way and taking his sister, Iona, with us to Bradford on Avon, we had lunch & a catch up with them before heading back to pick up Morley from school then visiting old friends Tony & Christine (retired vicar & schoolteacher) at Stonehouse. I don’t know who enjoyed the visit more, Tony & Chris or the kids! We then met our son Jer at the China Garden restaurant at the Whitminster Hotel for the best Chinese ever!

Today we are expecting our friends Gill & Trev and are planning to go for lunch at the Barley Mow & then take a little cruise down to Somerton & back if the weather holds. 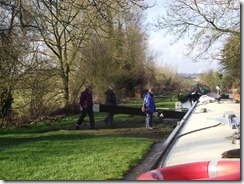 After rain at midday the afternoon became quite glorious for February and we had a pleasant little cruise down to Somerton Bridge where we found Wrens-Nest did fit in the winding hole relieving Joy of the worry of going through Somerton Deep Lock to the next turning point. The journey back ended just as the light was failing and we said goodbye to our friends and vegged out in front of the TV all evening.

The more observant of our readers will have noticed our postings of late have been conspicuous by their absence. This has been because we have spent the last month in Australia visiting family and friends on the Central Coast NSW and Perth WA and not wanting to advertise we have been away from home have saved all our blogging until now, so please forgive us.

If ever there was any doubt about that just consider the army of volunteers who stepped in to help people who have been affected by the floods. Ordinary folk turned up with mops, brooms and shovels, ‘Tradies’ [tradesmen] have given their expert services and building suppliers, materials to help rebuild people’s lives.
The Daily Telegraph (the Australian one!) quotes Jim McParkland, a landlord from Auchenflower, as saying the army of strangers volunteering in the street was warming his heart, with people pouring in to lend some elbow grease, scraping away the mud with shovels and brooms.
I felt proud just to be there.

Australian citizens, regardless of ethnicity, are most certainly proud to be Australian, everywhere you go there are signs on shops saying “Proudly 100% Australian owned” goods are marked “100% Australian manufactured”, these guys really want to support their own economy, OK the cost may be a little higher but what price keeping your own countrymen in work? That’s not to say Aussies are xenophobic, witness the huge Chinese population in Sydney and the popularity of restaurants serving food from across the globe. This is a marked contrast to the UK where prices are driven down and profits are increased by foreign imports and we seem to apologise for being British in case our heritage, traditions or beliefs offend anyone of another race or creed. The old rivalries still exist, not least because, I believe, the Poms have done rather well in the cricket recently; and no, I’m not offended by being referred to as a Pom or a Brit.  Our family here were proud to take Australian citizenship on Australia Day, which is a public holiday, hell we are frowned on by some authorities for flying the flag of St George and don’t even get to celebrate St Georges day with a bank holiday; isn’t there something wrong here?

Separated by a common language?

George Bernard Shaw is often credited with the saying “England and America are two countries separated by a common language.” Whist this could be said of England and Australia, it is in fact, much less true. The British visitor could, however be shocked to learn that Australians of both sexes often chose to go out in their thongs for most informal occasions, but before you get too excited (or alarmed) about this, it would be well to understand that we are talking about footwear here… Flip-Flops to us Poms! Ask for a Plaster, instead of a Band Aid  at the chemist and they may enquire if you have a fracture and suggest a visit to A & E! When shopping for food a courgette is a zucchini , a pepper is a capsicum and our grandchildren call felt-tip pens Textas ® and want a cubby house in the garden instead of a den, but on the whole there isn’t a big language problem.

‘O, pooh! boating!’ interrupted the Toad, in great disgust. Silly boyish amusement. I’ve given that up LONG ago. 2
I haven’t, of course, but I have to say that driving ‘down under’ is a far more leisurely pursuit than back home, outside of Sydney at least. Rules of the road are similar to the UK, they drive on the right side of the road (that is to say the left!) but there are some quirks, like when leaving a roundabout one usually takes the right hand lane, if you don’t want to have to merge into faster traffic, and when travelling on a main road, traffic joining from the right often has a joining lane in the middle of the road, which can freak you out as you see a vehicle headed out towards you as you pass the junction.  The roads are much wider (well it’s a big country, so they have a lot of land) and even in the bush [country] they have generous hard-shoulders, off the highways [motorways] the speed limit is usually 70 and that’s km/hr [less than 45 mph] so it makes for a more relaxing journeys.

The Japanese car manufacturers seem, collectively, to have the lion’s share of the market, followed by Holden (GM) and Ford who have a range unfamiliar to Brits and then, representing Europe, there are some Mercedes and BMW owners but few French or British manufactured offerings, it seems, with the exception of the odd Land Rover.

Kipling was, of course, talking about cultural differences but as we travelled across from NSW to Perth WA the five hour flight by Virgin Blue made us aware of the vastness of the Australian continent. The ‘small town’ cosiness of the Central Coast was swapped for the city life of Perth for a week (although we were staying with a friend in the suburbs, near Joondalup) and although Perth is considered small compared to Sydney there is much to see from the modern uptown CBD [Central Business District] down to Freo [Freemantle] which is considered ‘old’ by  Aussie standards, why some buildings are getting on for 200 years old!

Whether it’s Sydney or Perth public transport is excellent and for the visitor a Day Rider type ticket is a bargain as it gives access to all government run trains, busses and ferries. In fact, in NSW a Family Funday Sunday ticket is just a flat fare of $2.50 per person and in Perth Transperth operates free CAT (central area transit) bus services around the Perth, Fremantle and Joondalup CBDs every 5 – 15 minutes, now that’s the way to encourage people to leave their cars at home.

Our four weeks came to an end all too soon and we made the long haul back home via an overnight stop in a ‘Superior Suite’ at the Pan Pacific hotel Kuala Lumpur (don’t know how or why we were upgraded but we didn’t complain) and arrived back at Heathrow to be met by our son, Jeremy, who had been looking after Wrens-Nest for us, thankfully the UK temperatures had crept above freezing, and after stopping off at the Jolly Boatman for a ‘proper’ beer and a plate of Cheesy Chips we were soon back aboard snuggled up by the fire.

2.  The Wind in the Willows by Kenneth Grahame

3. Rudyard Kipling wrote a poem called "The Ballad of East & West" whose initial line reads: "East is East and West is West and never the twain shall meet."