A really easy day today, starting with a bit of shopping & breakfast at Tescos, 10½ miles and NO locks which took about 4½ hours. There were lots of baby ducklings and a field full of donkeys and goats along the way to go aww at.

The most interesting sight along the way (for me) was the sight of BCN Steam Tug Laplander at, I think, at Falls Bridge Works, just past the Newbold Tunnel, but the sign by the fuel pump proclaimed they were closed.

Built pre 1883 as an Ice breaker/Tug of wooden construction. Recorded as being repaired in 1879 on the BCN.
Had BCN No 2 number. Used in Wolverhampton in 1952.
Currently has a diesel heated and steam engine. 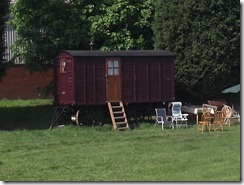 Before we arrived at Hawkesbury I spotted this caravan which was certainly not stuck in traffic like our friends Allison & Paul were today on their way to Wales. We arrived at Hawkesbury Junction at about 3:30 feeling in need of refreshment; being Bank Holiday Monday I suppose we shouldn’t have been surprised that the Greyhound Inn at Hawkesbury was packed with customers but we found ourselves a table in the garden, enjoyed the sunshine and sampled some Mardi Gras bitter whilst Joy indulged herself with a Pork & Stuffing Batch [I guess that’s a local word for bread roll] and a pint, a pint I tell you, of cider!
Catty enjoyed a big lump of the pork which Joy couldn’t finish and has been asleep ever since.