After a few busy days let’s try to catch up.

Since the last episode our new fridge arrived as promised 2:30 pm (well done ao.com ) and we high-tailed it out of town, just an hour and a half’s cruise down to Dover Locks (where confusingly there are no longer any locks) and moored on the bollards near the pub, from the distance I could see that they were painted red and wondered if they were ‘Disabled Moorings’, however on closer inspection it transpired that they had been painted to look like toadstools! Later on Joy contacted a friend saying we were at Dover, and she really thought we were doing a quick cross-channel trip! O.o 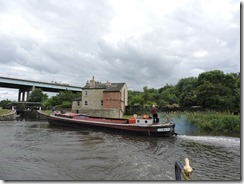 With eight locks to tackle today (and they were wide locks which Joy wasn’t looking forward to) we made an early start in order to be at Poolstock Locks by 10:00 am as there was a problem with a badly leaking ground paddle and there had to be C&RT staff present to see us through. In fact the leak was so bad the lock filled it’s self without opening any paddles! Joy didn’t find it so bad as we teamed up with another crew. 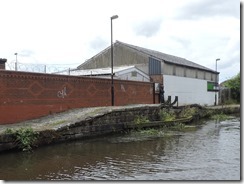 We stayed with them through Wigan and the apocryphal Wigan Pier all the way back to their mooring at Crooke (That’s Cr-OO-ke; NOT as us Southerners say it, like Australian for not very well) There were three more locks to do on our own the last one being 12 feet deep by which time Joy was quite confident doing them, as we left the lock, Ambush, an original 1930s Leeds & Liverpool Long Boat (70 footish) was coming in.

Just before this last lock we experienced a strange illusion of our map being wrong, there’s a railway & motorway bridge in quick succession; the difference in scale made it look as if the motorway bridge was nearer, but as we approached it was clear it was the other way round. 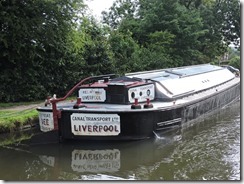 Just another half hour saw us at Parbold where we moored next to Dee, a Leeds & Liverpool Short Boat (60 footish) and short enough for the Wigan Branch locks.

After our day’s exertion we treated ourselves to an Indian takeaway from The Parbold Tandoori and very nice it was too.

23rd July – On to Downholland

Today was only supposed to take 3½ hours but we needed to get a pump out at Scarisbrick Marina, but before that there were 5 swing bridges to get through, they were mostly electrically operated but it’s time consuming as you have to moor up, stop the traffic, open bridge, go through bridge, moor up, shut bridge and off to the next one. 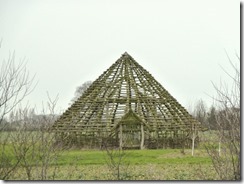 We saw this at Dutton’s Farm, Lathom and had to do a little research this evening to find out that excavations to install a gas pipeline in 1998 had revealed remains of an Iron Age and Romano-British farmstead on the site and this is a reconstruction of a roundhouse.

For a detailed write up see here.

At Halsall we managed to get a huge piece of plastic sheet around our prop too which delayed us again, then it started to rain! So a brief lunch stop at The Saracen’s Head  for a beer and some take-away chips to go with the flan we had ready, then on through the drizzle to Downholland where there was a space for us outside The New Scarisbrick Arms, but it was dinner on board the boat for us.