The Wyrley & Essington Canal is nicknamed the Curly Wyrley, due to its twisting course. Its peaceful, meandering waters see few boats, but it is popular with walkers, cyclists and anglers.

We were moored alongside nb Augustus overnight and being on the ‘inside’ we waited for them to leave and got away at 9:20 and in just 10 minutes we turned into the Wyrley & Essington Canal at Horseley Fields Junction.

The first impression of an industrial environment was balanced by the appearance of a shiny stainless steel ‘bridge/scupture’ spanning the abutments of an long gone railway bridge. If you look carefully at the picture above, you can see the reflection of our boat roof in it.

At  Wednesfield there was a Sainsburys beside the canal where several of our fellow ‘Explorers’ stopped for supplies, but we travelled on for an hour or so before having to stop & clear our propeller having collected a piece of material around it, a theme that was to continue throughout the day often having to engage reverse to try and throw off the rubbish, but often failing and having to do it manually.

We took a lunch break on secure moorings outside The United Kingdom pub, and had lunch aboard, meanwhile at the pub they were setting up the TVs to show the Harry & Megan’s wedding. As we continued after lunch Joy was able to catch some of the coverage as the reception was so good it didn’t seem to matter which way our aerial was pointing.

Very soon we were at  Sneyd Wharf, quite an attractive little spot with some residential moorings, where several of our group were lunching. 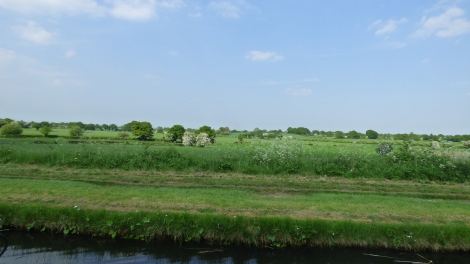 Onwards through  Birchills Junction and Goscote, with scenery varying from industrial decay to open countryside and just before 5 o’clock we arrived at Pelsall Common, a beautiful spot, feeling totally frazzled after 7½ hours and a dozen trips down the weed hatch.

After discussing the problem with Paul, who works at Rugby Boats, we decided it may be due to the design of our boat as no one else had anything like as much trouble.
Our R & D hull has what they term a ‘Slipper Stern’ which is designed to pull water up over the prop from the bottom of the boat, obviously it has the effect of hoovering up the rubbish too. 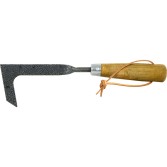 Just as we arrived we had a phone call to say our son Jeremy and his family were here to meet us and were waiting at the Fingerpost Inn on the edge of the common. I had sent Jer on a mission to Toolstation to buy a Patio Weeder which had been recommended as a prop clearing tool if suitably sharpened.

We had a mediocre meal with them, their steaks being overdone and my cheese and potato pie being mostly potato with melted cheese on top then returned to the boat to chill out for a bit before they left. 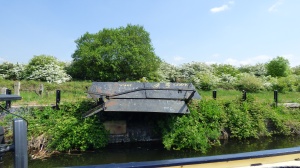 We thought an early start might give us a better chance as the water wouldn’t have been churned up too much, in the event we were the third boat away and we did have a better day cruising up to Catshill Junction and explored the Anglesey Branch, which was very pretty in parts with amazing views of the countryside.

We returned to Catshill Junction and took the Daw End canal, mooring at the  Longwood Boat Club where we had a barbecue and were entertained with songs by Phil Clayton of the BCNS.

Overnight we decided that as on Tuesday the plan was to return to the Wyrley & Essington Canal, where we had struggled so much we would avoid that, either by diverting via Tipton or leave the cruise and head back to Fazely which is what we decided.

We left Longwood  at 8:00 am and descend the Rushall locks (assisted by BCNS lockwheelers for which we were most grateful), and by 11:00 we turned left at Rushall Junction onto the Tame Valley canal waving goodbye to the others who turned right towards Walsall.

The difference was remarkable, we were able to make good progress down the very straight Tame Valley canal and before 1:00 pm we were at the top  of Perry Bar Locks watering up and have a bit of lunch. 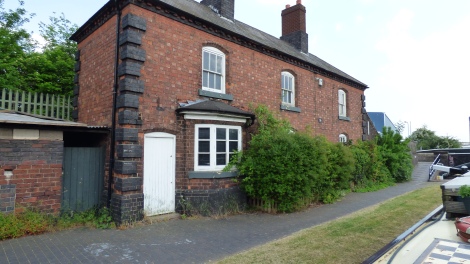 The 13 Perry Bar lock were well maintained and  not too difficult, halfway down we met nb Rune coming up, which meant most of the remaining locks were in  our favour and of course the locks we had come down were right for them.

At the bottom lock we got talking to a guy who lives in the lock cottage and said that since a WW2 bomb was discovered and detonated nearby at Aston, water from the lock has leaked into his cellar.

The next section took us under Spaghetti Junction to Salford Junction and we reversed down  Birmingham and Warwick Junction Canal to moor outside Star City again.  As we had the mooring to ourselves I took the opportunity to finish the repairs to our cratch table which involved some drilling, while joy did a jigsaw.

So we have put the last few days down to experience, and to be fair, the Explorer Cruises can only help to popularise the BCN backwaters, just not in our boat!