After having a good time with  Paul and Rosemary last evening and a peaceful night’s sleep with no traffic noise whatsoever we left our overnight mooring  at ten-ish having seen a few early risers go past us. Our first lock was Lock 9 which, due to age and ground settlement, is a bit narrower than most and causes problems for boaters who leave fenders dangling or historic boats with a bit of ‘middle aged spread’. I will probably think of this as Fincher’s Lock from now on, due to the problems nb Flamingo suffered last week, I follow their blog and you can read the story here. 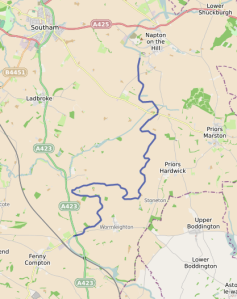 The standard narrowboat width was originally 7 feet  but because of this sort of problem, most modern boats are made 6 feet 10 inches wide.
We made reasonable progress up the flight and cleared the top lock at Marston Doles at 12:40.  We had lunch ‘on the go’ and followed James Brindley’s tortuous route, twisting along, hugging the 400 foot contour all the way. 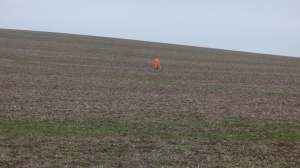 There were few boats coming the other way so our main company were the sheep and lambs in the fields. We did spot a couple walking the towpath with their dog and cat following along and a chap in hi- viz  in the middle of a field with what looked like some kind of aerial. There was a van parked in the distance but that gave no clue as the telephoto lens showed it was a hired ‘welfare van’.

We arrived at Fenny Compton where we found a mooring almost outside the Wharf Inn at half past three. We planted a little pot of daffodils in memory of Jade as this was one of her favourite places.

One thought on “Fenny Compton Wharf”