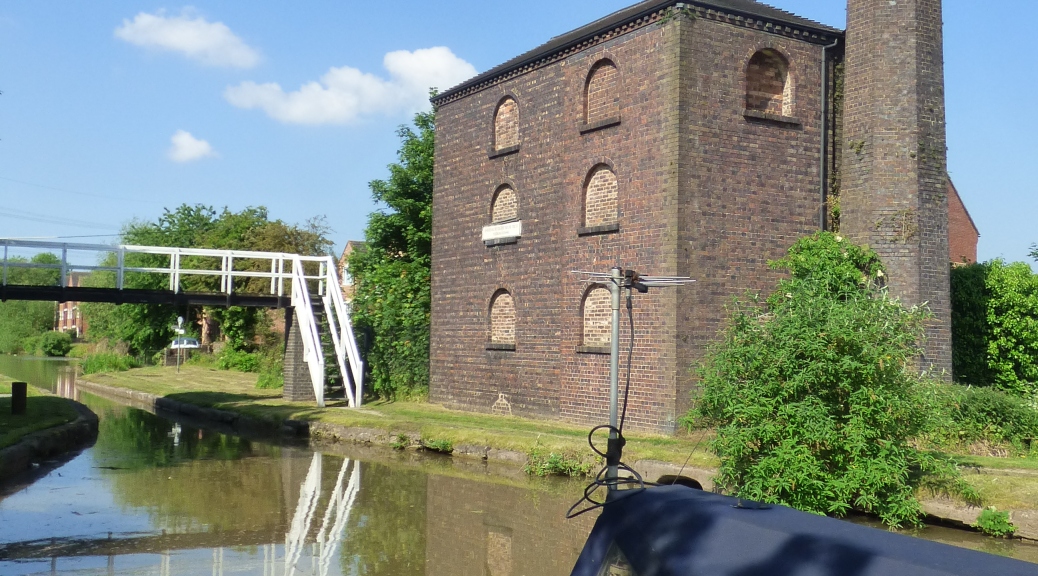 Well.. We never did get our pint at The Greyhound as by the time we got down there it was 6pm and both the bar and garden were packed with diners and there wasn’t a seat to be had. Never mind, we went back to the boat for our evening meal.

It was such a nice sunny mooring, near the old engine house we decided to stay another day and put a final coat of paint on the gas locker surrounds and touch up more spots on the handrail while Jade continued to survey the area.

We had been debating whether to continue on down to Coventry Basin, the consensus was that although the two hour trip wasn’t the most attractive journey, but the basin is a good base to look around Coventry. In the end the mundane need to empty the toilet tank made the decision for us, we knew Valley Cruises had a base there which surely must have facilities but didn’t know if these were available to the public and they didn’t respond to my email or phone call so we decided to give it  a miss this time.

Later this morning we were told there was a CRT card operated machine at  Coventry Basin but by that time we had made the decision to head homewards and call at in at Springwood Haven but first I started the day with a little walk to find some bread and milk and discovered Blackhorse Road Convenience Store just 5 minutes away from the footbridge by the engine house.

There are lots of baby water fowl about and before we left, a swan with her cygnets made an appearance. Later we saw some young moorhens (scruffy little balls of black fluff)

So we winded at the junction and started on our way home, near Charity Dock we we pleased to see a nice bit of hedge laying had been done and by lunchtime we were at  Springwood Haven. We spent a couple of hours there before travelling on the The Anchor for tonight’s stop.

After a couple of scorching days, this morning was drizzly but before 10 it had cleared so we got on our way and arrived at the top of the 11 Atherstone Locks by half past eleven. The volunteer lock-keepers were out in force and so we had help all the way down to lock 5. After that we only met one boat coming up, and as we were following a hire boat we had to turn (refill) all the remaining 5 locks. By the time we were nearing the last lock the wind had really got up (about 20 mph apparently) but fortunately it was behind us, but no such luck when we went down to turn at the winding hole where the cross wind was so strong it made it difficult to turn, needing two attempts and a lot of power to achieve!

Mooring up was ‘interesting’ too but we got there OK in the end at just after half past two and spent the evening chilling out and catching up with news from our neighbours.