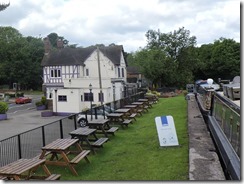 Firstly, as promised here is a photo from our mooring outside The Plum Pudding, but perhaps it doesn’t convey the strange sensation of being above the road traffic too well.

There was a stiff breeze blowing as we left which helped us out of our spot but didn’t make for pleasant boating for the rest of the day.

The first task was almost immediately to put Joy ‘ashore’ onto the towpath as we had go through the Armitage Tunnel, now this is another of those tunnels which have had the roof removed but it is only single way working so it’s as well to send a crew member ahead to check it’s clear. Joy simply sent me a text to say ‘OK’, what did we do before mobile phones? 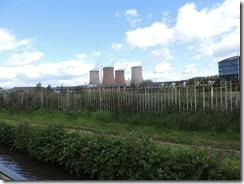 The power station heralded our entry into Rugeley and we were lucky enough to find a space on the town visitor moorings as another boat was just leaving.

We were welcomed by the sound of a brass band, which was very kind of them but apparently it was the town’s Charter Fair that day and probably accounted for the strangely dressed folk whom we saw later in the indoor market. Rugeley is a pleasant town and we were able to do a shop in Morrison’s (there’s also a brand new Tesco near the canal) and get Joy’s prescription from Boots.

While we were waiting for that we got ourselves a snack at Holly’s Cafe in the aforementioned market, it had a delightfully chaotic atmosphere with market traders and customers alike popping in and out. Sue the proprietor seemed heavily into charity work and was offering a roast pork dinner, followed by a pudding and tea or coffee all for £6 per head with £1 going to special care baby unit appeal (bless her). We however contented ourselves with a pasty and a sausage sarnie. Joy was asked if she’d like tomato with her sausage, but was surprised to get tinned ones! Perfectly fine, if a bit messy!

The wind continued to buffet us as we carried on after doing our shopping, so we found ourselves a somewhat sheltered mooring at Wolseley Bridge, where some folky folk were having a barbeque and a sing-song.

We knew that fellow bloggers Brian & Diana on nb Harnser were headed towards us but it was not till later we realised they were moored just the other side of the bridge and were able to have a brief chat as they passed us in the morning.

Now, I can’t seem to find out if this place is pronounced ‘Wools-ley’ like the cars or ‘Wol-sey’ either way we liked the mooring here so much that we have stayed a couple of days, done some odd jobs, varnishing for me and washing & painting for Joy (the arty type).

This morning we have been for a walk around the nearby Wolseley Centre which was very nice walk and we took loads of photos. There is also a Museum of Buildings which didn’t seem to be open and I can find no information about it except in this blog called Lichfield Lore.

Tomorrow we shall be off, but not far, just up to Great Haywood Junction and on to Tixall Wide.