We left our overnight spot at Hawkesbury Junction reasonably early (for us) about 10 am, we met nb Somerton coming through who we had previously seen at Hillmorton and chatted about cats on boats, then in was the 180° turn through the footbridge which went without a hitch, only to meet the historic Royalty class boat William coming through the narrows with it’s Bollinder engine chuffling away. Fortunately I managed to tuck myself out of his way and we continued on our way. 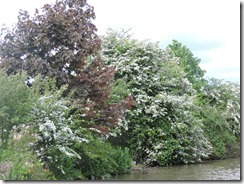 We were soon passing the junction with the Ashby canal where we picked up a bladefull, (got some rubbish around our propeller) this necessitated stop to clear it so we had an early lunch before carrying on.

The may blossom is looking beautiful at the moment and we enjoyed the trip into Nuneaton.

As we were passing through we saw nb Esther which used to belong to our friends Barry & Sue and on which we spent many hours getting our canal fix while we were looking for our own boat. As we left the town we had a tiny bit of aggravation with three kids, one of which picked up a handful of gravel which he threw at us, I responded by taking the boat closer to them and asking if I could make it easier for him to hit us. I then ‘playfully’ waved my mooring chain around my head so he asked if I had a shotgun too! So a little bit of banter defused what could have been a difficult situation.

By 3:30 we were in Atherstone and bagged a mooring, which another boat was just leaving, in a nice sunny position opposite the old Wilson & Stafford hat factory. A passing dog walker told us that he had worked there as a lad and that the factory was to be demolished to make way for new housing. A plan to convert the existing building had foundered as they would have had to drain the canal to stabilise the building. Further research revealed that the site is grade II listed so some of it may be saved.

Another gem of information he provided was that the hat making machinery had been sold to ‘The Russians’ and a discussion between ‘The Big Noises’  in a local pub of how the machinery might be moved out as the road access was so narrow was overheard by a local who suggested using the canal! They took up his suggestion and he was apparently well rewarded.

We walked down to the town to do a bit of shopping at Aldi and on our way back we decided to have a takeaway tea prompted by this advert for the nearby Coleshill Chippy.

A bit of a grump here because after ordering our food I was told the Buy One get One Free deal only applied to pizzas… Where does it say that? The chips weren’t up to much either, looking rather anaemic.

No sooner than we arrived I received an email from C&RT telling us that the Atherstone lock flight was closed Due to the top gate [of lock 6] becoming dislodged from its fixed position we have unfortunately had to close off the lock for the remainder of the day. We are arranging for a team to be on site first thing on Friday 29th May to drain off the water and undertake a thorough investigation of the situation.

Never mind, the forecast for Friday was foul and we had already decided that we would be staying put.

Investigations this morning have identified that the cup in which the gate sits in has become dislodged from its operating position.

A team will be onsite tomorrow (Saturday 30th May) to carry out the required works.

As soon as the navigation is open we will issue an update to advise.

There now a fine old queue behind us and boats turning around as fortunately there is a winding point before the locks, so we may be here some time, but we’re in no hurry.