We were up and on our way just before 9 this morning, but a couple of hire boats were up before us on their way back to the Black Prince base at Wigrams Turn and we caught up with the last of them at Marston Doles waiting for a Valley Cruises boat to come out of the top lock. This turned out to be an international meeting with a Norwegian crew coming up and a Danish crew going down, one lady even tried speaking to me in Norwegian or was it Danish, either way she was met with a blank look before realising I was a Brit and continued chatting in perfect English.

It turned out that all four Black Prince boats had Norwegian crews and as we worked our way down the flight, which was quite busy but with no real queuing, Waitrose were making a grocery delivery at the lock just past the Engine Arm, I thought they must be posh at Napton, but the illusion was shattered by the wheelbarrow being used to transport the bags onwards to his mooring. 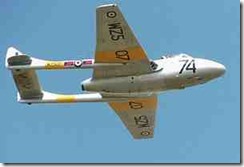 We made it safely through the damaged lock with the help of a volunteer lockie and arrived to have the gate opened for us at the bottom lock by another volunteer. Joy popped into the shop next to the Folly pub for some rolls for a well earned lunch break at the visitor moorings. Just as we were mooring up there was a vaguely familiar whistle overhead as a De Havilland Venom jet (or maybe a Vampire) flew past. I haven’t seen one of those since I was a kid but sadly couldn’t get to the camera in time so a photo from Wikipedia will have to suffice.

After lunch it was onwards, pausing only to take the obligatory photo of the windmill. Just before we reached Napton Narrowboats we spotted Alex’s nb Twisted Compromise moored up.  At Napton Junction the canal widens to assume the width of the Grand Union but retains some of the twisty, contour canal character so we were able to make good progress to find a pleasant mooring just past Shuckborough where Catty was allowed out to make ‘friends’ with a friendly dog on a neighbouring boat. We only have a 2G phone signal here so maybe this post won’t get on line until tomorrow.