We have been hatching cunning plans to make the most of my weeks holiday following the Bank Holiday weekend so last weekend we took the boat up to Fenny Compton and this week I commuted to work from there so we could leave there on Friday afternoon in order to reach Hillmorton by today so that we can travel to Crick Boat Show by car tomorrow morning. Phew! Did you take all that in?

Of course the issue was further complicated by having to work around the restrictions at Napton Locks caused by the collapse of one of the ‘wing’ walls and the fact that we wanted to meet up with my big brother before he moves to Spain.

Yesterday morning nb Bones arrived at Fenny and after a little judicious boat shuffling by Joy, Bones & Maffi both boats were watered up, the good ship Bones had a mooring and we were in pole position for departure when I got back from work.

So after a glorious few days of weather we set off on the circuitous course along the summit of the Oxford Canal towards Napton, of course the rain started almost immediately and continued until we arrived at Marston Doles where we had arranged to meet my brother and sister. My siblings duly arrived by car and took us down to The Folly Inn where we hoped to have a meal, however we were greeted by a sign outside the door saying ‘Fully Booked’. “Never fear”, says I “there’s always The Bridge Inn.” … sign outside ‘Opening Soon’, not today then. Well at least we knew The Wharf Inn was open back at Fenny, so in a few minutes we drove back to where we had left by boat 4 hours earlier! Although they were very busy we enjoyed a good meal there, as usual, before being chauffeured back to Marston Doles and bidding farewell to Jan and Jim.

This morning we made a start at the unheard of time of 7am and were at the problematical lock before 9am ,  and at the bottom of the flight by 9:30am. From then on it was a ‘good road’, as the old boatmen used to say, through Wigram’s Turn (Napton Junction), Braunston Turn and all the way to the top of Hillmorton Locks. 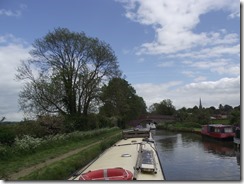 We were only held up briefly coming into Braunston by a ‘fat boat’ (kind of a broad beam narrowboat!) whose steerer seemed to have difficulty seeing over the roof and fitting it through bridges. As we entered Hillmorton we passed the boatyard from where we hired our first narrowboat for a family holiday over 30 years ago.

Who’d have guessed then, that today we would be celebrating living aboard our own boat for four years.

Tomorrow will be manning the RBOA (Residential Boat Owners’ Association) stand at Crick Show for a couple of hours so this evening we met up with fellow members  John & Judith who are kindly giving us a lift to Crick tomorrow.

Enough for today, my head hurts!