We have arrived ay Lechlade and found ourselves a mooring within a few yards of Ha’penny Bridge. [so called because that used to be the toll charged for crossing it… unless you were going to church]

We had left Radcot early-ish and made our way up river around some ever more fiendish bends without incident, although as we swung into the lock cut at Buscot I alarmed a cruiser captain who obviously didn’t appreciate the way a narrowboat pivots somewhere just forward of it’s centre point. There was, in fact, plenty of room but that didn’t prevent him waving his arms about and telling me I should keep to the outside of the bend. Not, I think, with 63ft of boat to turn! 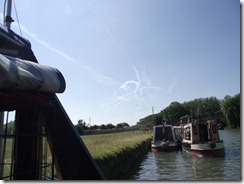 Finally we reached St John’s Lock with it’s statue of Old Father Thames and within ten minutes we were mooring up behind nb Ebony who had passed us last night at Radcot giving his classic Russell Newbury engine a workout. We spent the afternoon watching aircraft practicing for Fairford Airshow tomorrow. 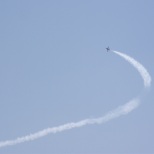