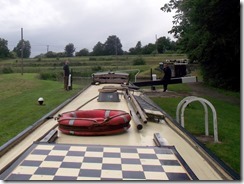 The weather forecast for today was rain, rain and more rain so we intended to stay put, however by 11 there was just a fine drizzle so we pulled pins and headed off.

As we approached Watford Locks, with the noise of the M1 in our ears, we found ourselves 3rd in the queue for the locks, but on reporting to the lockie we found there were three boats just about to come down too, so we had over an hour’s wait but at least we had time for lunch. 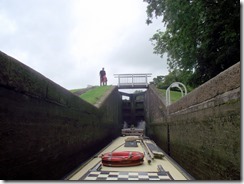 After the two first locks we entered the four lock staircase, where each lock leads straight to the next, and were introduced to the use of side-pond paddles (Red before White and you’ll be all right).   The rain held off until we reached the top lock but soon we were in the relative dryness of Crick Tunnel, well at least for three quarters of the way when it started to drip on us like crazy. After donning the regulation boater’s silly hat I stayed remarkably dry, while Joy, wearing her mac was much wetter. He, he he!

Crick Marina appeared on the left, only seen it from Crick Show before, followed by Crack Hill, only one sheep appeared affected having escaped onto the towpath and just around the corner a boat seemed to have entered the winding hole too fast!

At Yelvertoft the rain descended again so we called a halt for the night.