I mentioned in my post back in the beginning of December that I had plans to convert the redundant space in the kitchen which was designed to house a microwave into more storage. Well, slowly the ideas formed themselves into actions and a set of three drawers were made.

Now, I freely admit that my carpentry skills are less than adequate so I bought some drawer body kits with steel sides and runners on line from Drawers and Things which were easy to assemble and fairly easy to fix into the unit. 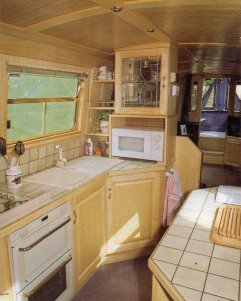 A long time before 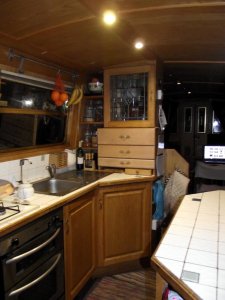 One of my work-colleagues took pity on me and made the fronts for us from solid beech to match the other kitchen units. Everything is now finished except for an application of Danish Oil which I am assured will bring out the colour of the wood. The result is that we now have easy, accessible storage for cans, jars and so on. 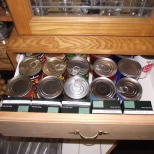 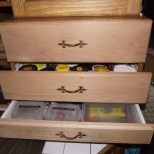 They even slide in and out!

Another find were some motion activated, battery powered LED lights which are ideal for inside the kitchen cupboards and for areas like the back cabin and the passage outside the loo which one tends to stumble through on those nocturnal excursions!

We have had a little snow over the last few days and a couple of days with ice on the canal but yesterday our hero, Dusty the coal boat came through and broke the ice and brought welcome supplies of diesel, coal and gas for us.

What a star he is!