We waited for the rain to ease off before departing Norwood Green. We had moored last night on a couple of almost hidden rings opposite The Lamb, which doesn’t really have its own moorings as the guides suggest.

Judging by the looks from the natives, boats don’t often stop here, but there was a bakers just down the road so fresh bread today.

We saw a boat coming up the locks so we made ready to leave, then another headed our way to share the 11 locks ahead of us today… Blast! It’s a wide beam! It was Tranquil Rose hotel boat headed for Hampton Court tonight so we let them go ahead and did the next two locks on our own before stopping for lunch at the top of the Hanwell flight. 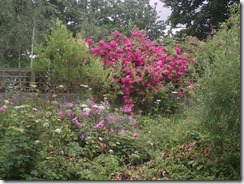 Suitably refreshed we made a start on the flight and came across a BW CaRT maintenance crew cleaning one of the locks.  They were kind enough to prepare the next lock for us and as we arrived at the following one two lockies turned up on bikes to see us through the rest of them. They apparently have to let water down regularly as there is a leak through Lock 93’s side pond.

On the way we passed the forbidding “Hanwell Asylum” which used to have its own entrance from the canal to bring in coal and export produce from its market garden. From here there was just a couple more locks and we were definitely in London once more as first industry, then office blocks appeared and planes bound for Heathrow flew overhead.

We arrived at Brentford to find all the visitor moorings were taken but after chatting to the helpful lock-keeper, who made a phone call to Thames Lock for us, found that we could moor down there. We had to wait about an hour for the River Brent to go down after the high tide  before we could lock down and have enough clearance under Brentford Bridge.

We now know we need just about 7 foot air draught for our top boxes to clear!We now seems to be in proper dockland with a working repair dock and moored up with a varied collection of craft, from Dutch Barges to a tiny Pusher Tug. Notices warn us to leave mooring ropes slack as this a a tidal part of the river, we moored with windows below the wall, but by 4 am it would be high tide.