Phew! What a scorcher! 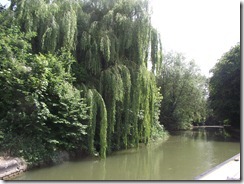 As the tabloids would say… but when I was making my early morning brew it was raining so we didn’t hurry our departure. We had been told to expect the pound we were moored on to drop, but we were fine, but after the next lock the water was so low it was touch and go at some points. As we reached the lock two BW guys rolled up to let some water down from Cowroast and after that we had no more problems and as the day wore on it got progressively hotter and hotter, by the time we got to Berkhamsted I was in need of a shower to cool off.

We were very impressed with Berkhamsted (Berko to boaters)with its well kept parks along the canal. The BW guys warned that there was a problem with one of the locks, named ‘Gas 2’ after the once adjacent gas works, part of the timber baulk protecting the cill had broken away and we needed to keep well out of its way. We stopped outside Waitrose were we took lunch and bought some groceries, “Our prices on branded grocery products are now identical to Tesco’s. (Excluding promotions)” crowed their advertisements, but we found their selection poor and shelves empty of stock in places. This was not due to staff shortages, we’ve never seen so many in store and a man in a booth to check car park tickets to make sure you don’t overstay! 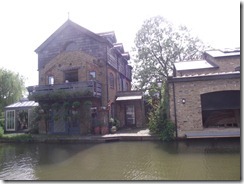 After our lunch we moved out of the town centre, past the station and the totem pole (yes really) and into a pleasant residential area, where we are moored opposite this interesting house which has the look of a converted warehouse which has had and extra story added, and in the adjacent workshop someone is building a wooden boat.