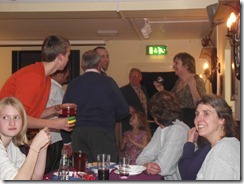 Last weekend we were busy celebrating our friend Vic’s 65th birthday & his retirement in Devizes, which incidentally is where I had my first encounter with canals at age 3 when I was introduced to the Caen Hill flight of locks by my Aunt Bet.

We have known Vic & his wife Irene for over 38 years as they were Joy’s neighbours when I first met her (and after we were married) and on this occasion we met at the New Inn at Coate where they had Wadworths 6X straight from the barrel [that really is proper beer Maz!!!] and excellent food prepared by Vic’s daughter-in-law Elaine who together with husband Andy run a deli & outside catering company in Marlborough. 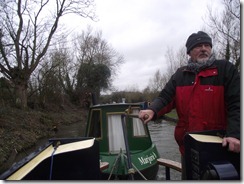 On Tuesday morning there was a knock on the boat at it was Matt from Tooleys who asked if we could tow a neighbouring boat, Marjorie B to their yard in Banbury for repairs, after a family conference to decide how we could fit this into our busy schedule we set off the same afternoon with Marjorie B in tow on ‘cross straps’ [i.e. tight behind us]  with Duncan, the incumbent of Marje the Barge steering her. We travelled as far as Aynho Wharf where we spent the night and continued onto Banbury Wednesday morning. It was quite an experience learning to tow another boat, especially through bridges which were on bends but we arrived there safely about 3 pm. 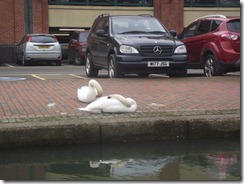 Thursday Joy went back to Heyford by train for her art class and I joined her in the afternoon to visit our friends Dick & Patsy. When we returned at Banbury we were amused to find we had been joined by two swans who slept beside us all night!

Friday I went to Cropredy to take a look at a boat which had flat battery problems and today we were joined by our son and a boatload of grandchildren, we boated back to Aynho with them and after some car shuffling we said goodbye with us all tired but happy.