The stretch of canal from Heyford down to Thrupp is really quite lovely & we never need much of an excuse to make a trip down there. The excuse on this occasion was that Bones had asked me to service her engine and it was clearly going to make life Much Easier by mooring up by the Good Ship Bones.

However, before that we had the excitement of purchasing a new chimney from Tooleys in Banbury where we found Paul, an erstwhile colleague from Oxfordshire Narrowboats working.

Back at Heyford we also had the pleasure of meeting John & Fi of nb Epiphany who moored up next to us, we shared cups of tea and got to know each other a bit. Since we have been living on the boat it seems so much easier to strike up friendships like this, we wonder it’s sharing a common lifestyle or perhaps it’s just something about boaters!

After a recce to check the filters required for Bones’ BMC diesel, they & the oil were obtained and we were good to go! A chance chat to Ian (our ‘vicar’) revealed he was playing rugby on Saturday and Isobel, his youngest, was condemned to freeze on  the touchline watching her dad make a fool of himself so Joy suggested she came cruising with us instead. 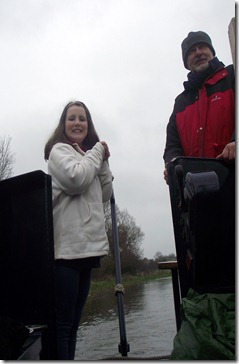 We set off quite early Saturday morning and met Ian & Isobel at Pigeons lock, she was really keen and after lunch took the helm down the section of the River Cherwell between Bakers Lock & Shipton Weir. She managed the twists & turns of the river famously and we arrived at Thrupp Canal Cottages to meet up with her dad (weary but victorious) We made the decision to turn before the lift bridge and reverse up this section as the next ‘winding hole’ is miles away.

The 48 hour mooring soon filled up here so we were fortunate to arrive early. We were conveniently placed for the pub quiz at The Boat Inn but it didn’t mean our team won like last week, but managed second (out of 3 teams :-/) 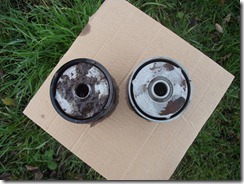 Yesterday we reversed up to the next pub (The Jolly Boatman) where we met up with nb Epiphany again. (not in the pub before you jump to unfounded conclusions) and today we found a space to shoehorn ourselves into next to nb Bones so that I could do the service. Unfortunately the filters were pretty grotty so I think the tank will need some cleaning before too long. Sorry Mort!