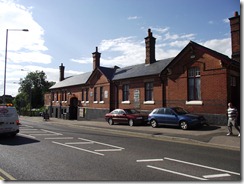 Whilst staying here for a few days we visited Rushden Station this afternoon and although the station finally closed 1969 it is now the home to The Rushden Transport Museum run by the thriving Rushden Historic Transport Society.

The museum was particularly enjoyable with an informal feel and it seems an access all areas policy, they have a working signal box and we were invited into a Travelling Post Office van which now houses a model railway layout. They already operate passenger carrying Steam Days and have ambitious plans to extend the track into Higham Ferrers and establish a small station halt at Higham which will allow passengers to enjoy the centre of Higham.  I almost forgot to mention that the society has its own bar in the station which won CAMRA’s National Club of the Year 2010 award.

‘The Club is a real attraction for both the discerning beer drinker and beer novice alike, but despite its special appeal to railway enthusiasts, it’s a valued community outlet, where people of all ages and backgrounds can meet for a drink. The Club truly deserves the title as Best Club in Britain, and I hope its success brings further publicity to this historic site.’

There was a 1965 Northampton Corporation Daimler double-decker bus waiting outside to take us down to the park so we could visit Rushden Hall and the town museum as part of the town’s Heritage Weekend.

Having been a boy of 15 in 1965 travelling to school daily by bus I found this Northampton bus surprisingly dated for its day (some might say traditional) with its basic utilitarian half-cab and open rear platform.

Future events include a Jazz and Steam weekend next weekend and a LMS Branch Line at War weekend in October.

Just to show that we didn’t laze about all morning we visited Rushden & Diamonds stadium for a car boot sale & bagged a few bargains including a digital set top box for my sis and a set of Toshiba speakers for the boat.