Apologies for the brief intermission since our arrival back at Heyford, we have been busy having visitors, and doing various jobs!

We had arranged for our grandson, Morley, to stay with us for a few days and made the trip back to Dursley to pick him up,  it seemed so fast driving a car again after eight weeks of boating! We went shopping with him to Attwoolls, a local camping store, and purchased a ‘self inflating’ mattress and pillow which he made himself comfortable on in the back cabin, next to my workbench! We do have a guest bed in the saloon but this would have meant us going to bed at the same time as our seven year old visitor.

We had a couple of outings with him, first to Bletchley Park (Home of the WWII codebreakers) and beat Grandma at outdoor chess! We also went to Oxford Natural History Museum where he was fascinated by the dinosaur skeletons and the shrunken heads in the adjoining Pitt Rivers Museum, whilst grandpa enjoyed the architecture with its pillars of different stone from all around the UK and the delicate iron tracery of the roof trusses. 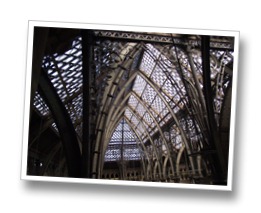 The building itself is one of the finest examples of the Victorian Gothic style of architecture, exhibiting a wealth of naturalist carving; the huge glass roof over the central museum court is supported by cast iron shafts, decorated with wrought iron spandrels.

We had to return to Dursley for a meeting at the bank so synchronised this with Morley’s return home. He was very good and endured the meeting at the bank with us in a room with the sun streaming in and broken down air-conditioning! We also took the opportunity to catch up with our friends Myra & Mike for a cup of tea and later Paul & Allison over a meal at the Buthay at Wickwar.

Over the next couple of days I did a some jobs on John’s Acorn No 5 fitting a new shower pump and thermostat to the central heating circulation pump as it was running non-stop, a bit annoying as it is sited under the bed! 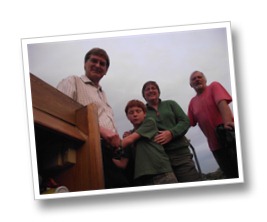 More visitors arrived on Saturday with Joy’s niece, Chris her husband Peter and their son Thomas. We took them for a little cruise down to Kirtlington Quarry and back for a picnic. They all enjoyed the trip, Thomas helped work the locks, explored the quarry, survived falling down some steps and picked enough blackberries to make two apple & blackberry crumbles.

Sunday morning dawned early courtesy of a text from Bones who then joined us for breakfast and we spent an enjoyable time catching up with each other’s news before we went off to church.

Wrens-Nest has to go into dry-dock for blacking at Tooley’s so the plan was to take her up to Banbury on Tuesday, the forecast wasn’t good however so we set off Monday instead and spent the night just past Twyford Wharf and carried on to Banbury Tuesday morning, winded at Grimsbury Wharf and managed to find a space at Castle Quays where we stayed until delivering our boat to Tooley’s on Thursday morning. We are now temporarily homeless until it’s finished 😦 but don’t worry my big sister, Janet, has taken us in and we are staying with her & Jim for a few days.