This morning we awoke to grey skies but no rain so we set off up the rest of the Napton locks to Marston Doles, the traffic was considerably lighter this morning, it was suggested by another boater that this might be due to the fact that the Folly Inn was drunk dry last night following the weekend’s ‘Folk n Boat n Beer Weekend’ (I couldn’t possibly suggest that boaters would have has anything to do with consuming that much beer!)

Joy has now taken charge of bringing the boat into the locks, mainly because there is no place for me to step off at the lock mouth coming up this flight, so it was Hobson’s choice but she now admits to enjoying doing it 🙂 not to mention the admiration she receives. She even navigated out of the top lock at Marston Doles which has a right hand turn as you emerge and on this occasion a boat waiting to come in. 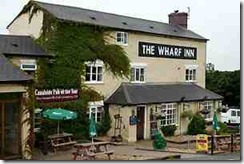 The Met Office forecast was spot on and as predicted it started to drizzle as we approached Fenny Compton and we were very fortunate to find a space to stop just past the Wharf Inn which we visited on our outward journey, so lunch was partaken therein and while we ate the heavens opened and we were so glad to be safely inside!

The pub also has a campsite, a small, if somewhat expensive, shop (even DD doesn’t charge £2 for half a dozen eggs) and a launderette which we are currently making use of. Tonight they have a ‘Spice Night’ with various curries and also spices for sale so we might just have to try that out.

Sorry, not our own pictures today, too rainy.

P.S. Saw Kangaroo & Australia (Trad motor & butty) go past this evening and the crew in the pub later!