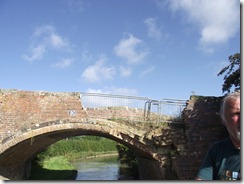 We left our quiet berth this morning and set off for Napton and as we journeyed along we noticed the dreadful state of some of the bridges, the one pictured being the worst example, yes… it’s only an accommodation bridge & not therefore British Waterways top priority I suppose, but failing to spend a few hundred will surely soon mean a bill of many thousands if neglected. 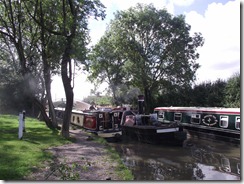 The weather was glorious today despite the forecast of heavy rain tomorrow. Soon the spire of Braunston church came into view and we shortly we were at the water point seemingly at a really awkward place adjacent to the junction and opposite a row of moored boats! Whilst we were filling up with water and disposing of rubbish we heard a whistle and out of the junction came steam narrowboat Adamant 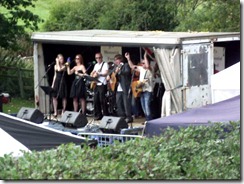 As we passed the windmill and approached the corner before Napton Bottom Lock we caught up with several boats and soon found ourselves in a queue of 8 boats waiting for the lock and had to breast up against a Viking Afloat hire boat until it was our turn. Our time was not spent idly as there was an event at the Folly pub nearby with a band playing my kind of music, Van the Man’s Brown Eyed Girl, amongst many others and Joy bought some cheese from the Cheese Boat. When it was finally our turn there was people operating the lock for us and collecting money for JJ’s Memorial Event at the pub.  (JJ’s Memorial Fund primarily raises money towards helping injured Paratroopers and supporting the families of Paratroopers killed in action.)

We made our way slowly up the locks and nearly reached the top before finding a place to spend the night moored behind Moore2Life as due to the volume of traffic we thought that them ahead of us might have nabbed all the spots after the top lock.