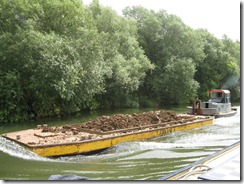 We set off from Pershore Recreation Ground this morning and were soon at Pershore Lock where a large sign warned us of Commercial Traffic Ahead , we had to ring Pilot Boat ‘Tardis’ to announce our arrival and he warned us that there were three barges and tugs working ahead.

We pressed on keeping a good look out, we soon found the Pilot Boat and exchanged greetings and saw the first of the barges unloading. Within a few miles we passed the two tugs who were pushing dumb barges full of soil and then the site where they were moving it from and still have no idea why they were moving tons upon tons of soil a few miles up the river.

We stopped for lunch at Eckington Wharf which has a picnic place which Graham & Judy knew well and then went on down to Twyning where we said our farewells them at the Fleet Inn where they were meeting friends tonight. For our part we travelled on down to Tewkesbury passing under the M5 near the M50 Junction, a view we have often seen the other way round. 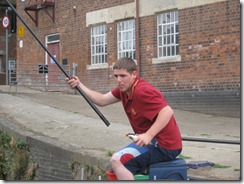 We phoned the Lockkeeper at Avon Lock (Tewkesbury) who told us there were moorings just past the lock, which we completely managed to miss and had to annoy a whole lot of fisherman (who we learned had a match on) in order to turn around. We phoned the Lockie again and he explained in detail where we were supposed to be, there were some lads fishing there too who were also none too pleased that we moored there, but we managed to squeeze in and make our peace with them. Later a ‘Tupperware’ boat moved out of the way and we were able to move up a bit as the lads were coming back at 6am tomorrow!