Good progress made today, after a reasonably early start (for us) we pottered along through the countryside, along the summit level of the canal, through fields of sheep, hedgerows of wild flowers and unimpeded by locks until we reached Marston Doles, where begins the Napton flight. We took a lunch break through the mid-day heat and by this time Joy was feeling better after having a poorly side yesterday, so she sprang into action at the first lock only to strain it again 😦 so after a break for tea & painkillers she decided that she would take the boat through the locks today whilst I operated the gates. In fact she managed very well and grew in confidence. 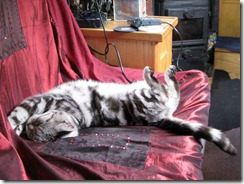 The locks down  to Napton went remarkably well managing to work with boats coming the other way so gates could be left open for each other with the water levels already right for next boat.

Catty had been getting a bit stir crazy yesterday and wanting to get out and explore but as we were not staying put we couldn’t let her. Before the last lock we let her into the boat so she could stretch her legs however she abused our trust and she was spotted climbing out the kitchen window at the lock, just in time to be captured and put back inside.

After that we needed to moor up but everyone else had got there first. A lovely spot opposite Napton windmill proved too shallow, Joy didn’t want to be next to a field of cows anyway (They were horses!!! See what you have to put up with when you’re married to an Essex Girl!!!) Eventually we found a space just the right size for us and spent a peaceful night there before venturing onto the Grand Union tomorrow.